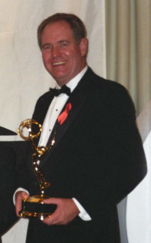 Prior to Star Trek, David created visual effects for a number of science-fiction television series including "Buck Rogers," "Battlestar Galactica," "The Flash," "V" and "Intruders." David also operated his own studio for more than 12 years producing visual effects for such feature films as "Circuitry Man," "Creepshow," "Lawnmower Man," and "Real Genius."

David has had about thirty industry-related articles published and spent 19 years as an instructor at The Art Institute of Phoenix.

David Stipes is a two time Emmy® Award winning VFX artist with over 40 years of experience in the film industry in various aspects of visual effects and animation.

David worked as a Visual Effects Supervisor on four Star Trek series: "The Next Generation," "Voyager," "Deep Space Nine," and "Enterprise". David championed the use of computer-generated imagery (CGI) for Star Trek, which completely changed how the visual effects are created for the shows.